[Tampa, FL – May 22, 2020] – Matt Birk, recently appointed as The Commissioner of Sports at React, LLC, took to the airwaves of KFAN FM 100.3 Minneapolis/St. Paul this morning, to make a bold prediction: the on-time start of the 2020 NFL Season.

Birk was emphatic during the live on-camera interview. “I declare, as the Commissioner of Sports, that there will be football this fall… September 10, 2020. I one hundred percent guarantee that there will be football.”
Despite the questions raised about COVID-19’s impact on live sports around the world, The Commissioner cited several reasons for making the bold prediction, including his insights as a former NFL player himself. “There’s more risk on any given play, for them, physically, than being affected by this virus… They’re not into surgical masks, they’re into face masks… They are football players. Football is not a job… this is what they were made to do.” Birk also noted that the relatively short career of NFL players insures most players will not elect to sit out a season during their prime earning years: “They don’t have guaranteed contracts… they’re not getting paid if they don’t play.”

Birk’s comments can be heard here.

In addition to his proclamation about football’s start, Birk provided good news for enthusiasts of the sport: “Fans will be in the game this year. For the first time ever, fans will be able to play along in the game.” Birk went on to formally announce the launch and release of the Super Squares® Game Show App.

The Commissioner shared with listeners details of the beta release of Super Squares® Classics, available by invitation to media, sports, brands and agencies, in sync to the Monday Night Football® game being broadcast on May 25th on ESPN. The re-airing of a 2015 regular season game between the Pittsburgh Steelers and San Diego Chargers will provide an opportunity for insiders and fans alike to experience the first ever sync-to-replay game second screen experience. 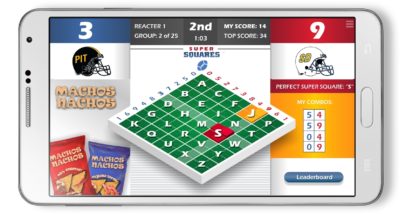 Prizes for the beta game will feature ten autographed “The Commissioner” Collectors’ Edition footballs, with the Grand Prize Winner receiving The Commissioner Gift Pack. On the day of the event, React team members including Birk, Chief Content Officer Tim Sabean, and React CEO Frank Maggio, will be made available for on-air radio and TV interviews, with additional prizes being awarded to live listeners who play Super Squares® Classics later that evening.

The May 25 Super Squares® Classics beta event will also provide fans with exposure to some of the more creative advertising being talked about on the Internet. As with all Super Squares® games, in-app ads are presented as content, with ad-based quiz questions each quarter providing important game show points to players, when answered correctly. Fans will award from 1 to 3 stars for every ad played in the app, providing React and participating brands and agencies with census-level fan sentiment measurement. “React is all about giving fans the best seat in the house, and a platform to cheer, play, and be heard,” adds React CEO and Founder Frank Maggio. “Every player votes on every ad, so by the end of the football game, we will KNOW which ads work better, and which ads are fan favorites.” Concludes Maggio, “Fans are the energy of sports, and Brands are the benefactors. React is committed to giving fans and brands the respect they deserve.”

Founded by adtech and media measurement maverick Frank Maggio, React LLC is an experiential advertising technology and entertainment company that thinks of “advertising as a sport™.” By adrenalizing advertising™, React excites audiences with rewarding, branded two-screen experiences during the most viewed and attended sporting and media events in the world. The company’s commitment to “respect, protect, and reward attention” honors user privacy by never selling or sharing personally identifiable information. Details about React can be found at www.react.net, and Super Squares® details are available at www.SuperSquares.com.